Whitsun or simply Whit meaning "White Sunday", as white garments were worn by those newly baptized on this day), is the name used mostly in the United Kingtom for the annual Christian festival commemorating the descent of the Holy Spirit on the disciples of Jesus after his ascension from earth to heaven on Ascension Day. It is celebrated on the seventh Sunday after Easter. 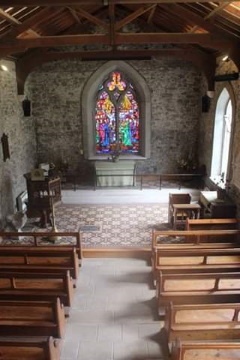 Outside the UK WhitSunday is known as Pentecost meaning "fiftieth day", as itis held on the 50th day from Easter Sunday.

This photo is of the Evie Hone 'Pentecost' window in the church / visitor centre on the Hill of Tara.

Pentecost celebrates the coming of the Holy Spirit in the form of flames to the followers of Jesus, as recorded in the New Testament. Jesus had told them to wait until the Spirit came to them. The Bible says that on the fiftieth day after Easter, a noise that sounded like a violent wind filled the room where Jesus’ apostles had gathered. It was followed by a fire that split into several flames, each of which came to rest on the heads of the apostles. The apostles reported being filled with the Holy Spirit as Jesus had promised before he ascended into heaven.This led the apostles to spread His word, all going in different directions to testify to the resurrection and baptise converts. The first Christians began to organise into communities under the direction of the apostles. Pentecost celebrates the beginning of evangelisation and the birth of the Christian church.

In 2005, the French government removed Whit Monday as a public holiday and suggested changing the holiday to Solidarity Day. The holiday would focus on raising money for the disabled and elderly, but labour unions in France protested by taking Whit Monday off to continue the tradition. In 2008, Pentecost was re-instated as a national bank holiday and the French government now allows employers to create a Solidarity Day on any date.

Christians in sometowns and cities have traditionally taken part in Whit Walks. Whitsunwas the time for walks and processions. The traditional "Processionof Witness" has long been celebrated throughout the North West of England.

In Gloucestershire, this very strange custom takes place today and so Whit Sunday is often referred to as Bread and Cheese Day.

In St Braivels, Gloucestershire, following evensong on Whit Monday, basketfuls of bread and cheese are thrown from a wall near the old castle, to be scrambled for in a lane below. The locals of St Braivels have been hurling bread and cheese since the 13th century, when the custom began probably as a payment for the villagers' right to cut timber from a nearby wood.

Gloucester cheese Rolling. Randwick, Gloucestershire, England: After rolling three double Gloucester cheeses around the church, one is cut up and shared amongst bystanders and the other two are rolled down a steep hill.

Stilton Cheese Rolling.Stilton, Cambridgeshire: Teams of four, in bizarre costumes, roll stilton cheese along a 50-yard course. They must not kick or throw the cheeses. The prize is a whole Stilton Cheese, which weighs about 16 pounds, and bottles of port — thetraditional accompaniment.

Cheese rolling also takes place in other areas around England.

In Ulysses there are four references to Whit Monday: two by Bloom and two by Molly -usually in the context of Bloom’s bee sting on Whitmonday, 23rd May1904.

Whit Monday in old Ireland was deemed to be an unlucky day. All precautions were taken against accident or ill-fortune and very few people would set out on a journey or risk doing anything dangerous - particularly if it involved water.

Water was completely avoided, for fear of the danger of drowning. People didn't bathe or go swimming; the fishing and sailing boats were left idle; and it was considered very foolish to even walk along the edge of the sea, river or lake. People believed an old superstition that all of those who had perished in water rose up on Whit Sunday to try and force the living to join them.

It was also believed that any animal or human born at Whitsuntide would die a violent death or cause the death of another. The way to avoid this fate was to have the infant kill something. One custom was to put a live insect into a baby's hand and squeeze their little fingers until the insect was dead. Having caused a death, the child was freed from the spell. The same thing used to be done with young animals. Counter charms like this was common and were often used to protect against an evil influence.

It was believed that people, especially children, who were suffering from an illness were more likely to die at this time of year than at others. In some part sof Ireland, a green sod was laid on the head of the afflicted person in hopes that the mimicry of a burial might prevent an untimely death.

Another custom was to decorate the house with Birch as it had protective powers. Horsebrasses were also used for protection.

Whit Monday was a day for honouring a patron saint, devotions at holy wells and enjoying the festivities at a local fair. In 1829, Whit Monday ceased to be a Holy day of Obligation for Catholics and most of the activities associated with Whit Monday have died out.

Many Christians in Germany observe the Second Day of Pentecost, on the day after Pentecost (or Whitsunday). It is a national public holiday with various local and regional customs.

The night between Pentecost, or Whitsunday, and Pentecost Monday is known as the night of unrest (Unruhnacht or Bosheitsnacht). In the past, people thought that evil spirits were active during this night and would steal any property not locked away. Now, in some areas, young people play the role of the evil spirits and move small agricultural tools and garden benches to other properties. Young men may also nail birch branches to house walls of young women they want to marry.

The Pentecost week celebrations continue beyond Monday in some areas. The Tuesday after Pentecost Sunday is known as Forest Day (Waeldchestag) in Frankfurtam Main. A large party and fun fair are held in a wooded area of a park on the town's outskirts and neighbouring suburbs. An outdoor play about the local history of the area and a historical festival are held in the town of Deidesheim.

In Baden-Wuerttembergand elsewhere in southwest Germany, some old and re-discovered traditions are thriving again, such as decorating houses, barns, chapels and churches with fresh-cut greenery, branches and birch twigs, and adorning rooms with flags, red ribbons and flowers the colour of Pentecost.

In past times, popular superstitions about Pentecost revolved around certain herbs, plants and flowers. Ringelblume (calendula) was believed to have curative powers if picked on Whitsunday morning at sunrise

Water, scooped up from wells or brooks at this time would heal the sick.

The Wednesday after Pentecost Sunday is known as Garlic Wednesday (Knoblauchsmittwoch) in an area around the border between the states of Saxony-Anhalt and Saxony. The day was traditionally marked by eating a dish containing a lot of garlic. The celebrations were also political and were banned around 1870. However, the customs were recently revived.

In Romanian the celebration is called Rusalii.

In popular belief, Rusaliile are the charmed spirits of the dead, which refused to go back to the underworld after they left the graves on Maundy Thursday and spent Easter with the living and begin to harm people. To appease them, people avoided to name them Rusalii and gave them different names: Iele, Zane (Fairies) or Frumoasele (Beautiful ones). These spirits live near the springs, being able, through their songs, to take people’s minds and sicken them.

Rusaliile are wandering, dressed in white, dancing and searching for untravelled places. The locations where they danced remain burnt and infertile.

The illness is like a hypnotic trance that can be defeated only with the magical power of Calusari , a Romanian hobby horse dance, that is a healing and protecting ritual and was danced in people’s yards or on the street. The custom is still kept in traditional Romanian villages, especially in Southern Romania.

In some villages the tradition is that believers must go to church with walnut and lime twigs to be blessed. With these holy branches they will adorn their homes and icons because they say they have the power to ward off evilspirits. and protect the gardens from hailstone. In some areas, in addition to lime and walnut, people still use lovage, garlic and wormwood and place the plants in their pockets.

These are some of the Romanian superstitions linked to this feast: