is a country saying for this time of the year. 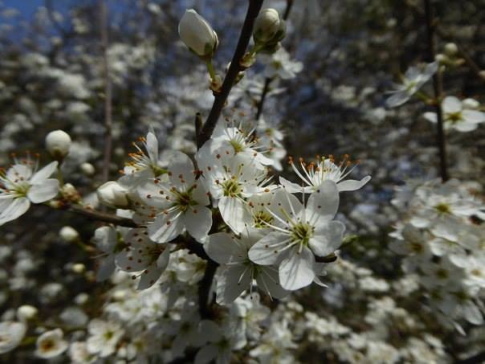 The Blackthorn Winter is a spell of cold weather in early April which often coincides with the blossoming of the blackthorn (Prunus spinosa) in hedgerows. The pure white of the blackthorn blossom, which appears before the leaves, matches the snow or hoar frost covering the fields nearby and almost invariably bitter north easterly winds. The longer days and sun gaining strength this time of year we're often given a spell of warmer weather - but then the Blackthorn Winter comes along and reminds us it’s not quite summer yet.

A Blackthorn Winter can be described as the opposite of an Indian summer.

Did you know that statistically, we are more likely to have snow at Easter than at Christmas?

Blackthorn blossom start to appear in the hedgerows end March, beginning of April. The blossoms which are appear before the leaves on dark smooth thorny branches. The Blackthorn’s bark is dark and smooth giving a contrast of white blossoms against black branches. The blackthorn flowers eventually become purple sloes, ripening in autumn and harvested traditionally in October or November after the first frosts and used to make a lovely Sloe gin liquer.

Blackthorn blossom should never be brought into the home lest certain death would follow. I was always taught to respect the blackthorn as if the long sharp blackthorn spikes puncture the skin it can lead to septic poisoning. It is also said that the crucifixion’s crown of thorns was almost certainly blackthorn.

The old Celtic word for the tree was “straif” from which we take the word “strife”. In Irish the tree is called Draighean.

Crataegus, is derived from the Greek kratos "strength" because of the great strength of the wood and akis "sharp", referring to the thorns of some species. In Irish the tree is called Sceach gheal. It usually blossoms in early May with the warmer weather, hence the saying:

This is a warning not to shed any clothes before the summer has fully arrived and the Mayflowers / hawthorn blossom snare in full bloom. Hawthorn blossoms become the red haws in the autumn and are used to make Hawthorn Jelly and Hawthorn Brandy.

Hawthorn is a good tonic for the heart and circulation. Blackthorn Prunus spinosa is frequently confused with the related Prunus Cerasifera cherry plum, particularly in early spring when the Cherry Plum starts flowering somewhat earlier than Blackthorn. They can be distinguished by flower colour, Blackthorn blossom is pure white, whereas Cherry plum blossom is creamy white.