St Kevin was of noble birth, the son of Coemlog and Coemell of Leinster. He was born in 498AD at the Fort of the White Fountain and baptized by Saint Cronan of Roscrea. His given name Coemgen (anglicized to Kevin) means "fair-begotten", or "of noble birth". Tradition says that Kevin was a pupil of St. Petroc of Cornwall, who had come to Leinster about 492.

Kevin was ordained by Bishop Lugidus and, following his ordination, he moved to Glendalough, Co. Wicklow, in order to avoid his followers.

He lived as a hermit in a cave (a Bronze Age tomb now known as St. Kevin'sBed), to which he was led, in the account of Vita Sancti Coemgeni (Life of St. Kevin), by anangel. This overlooks the upper lake, about 30 feet above the lake. The access is about 3 feet high and 2.5 feet wide and opens out to be slightly larger. It would have been impossible for an adult to stand upright in, so it is quite likely that St Kevin only used it as his bed, or a place for meditation and prayer. St Kevin lived as a hermit for seven years . His companions were the animals and birds all around him. 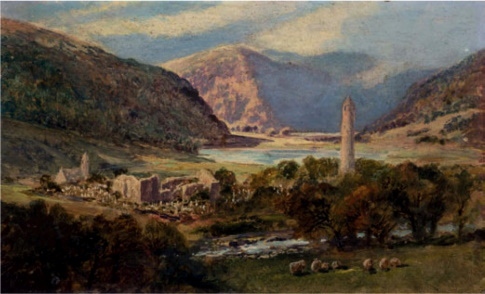 By 540 his fame as a teacher and holy man had spread far and wide. Disciples arrived and a settlement enclosed by a wall, called Kevin's Cell, was established nearer the lakeshore. Many people came to seek his help and guidance. In time Glendalough grew into a renowned seminary of saints and scholars and the parent of several other monasteries.

In 544 Kevin went to the Hill of Uisneach in Westmeath to visit the holy abbots, Saints Columba, Comgall and Cannich.

He then proceeded to Clonmacnoise, where St. Cieran had died 3 days before. Having firmly established his community, he retired into solitude for four years, and only returned to Glendalough after much pleading from his monks. Until his death around 618 Kevin presided over his monastery in Glendalough, living his life by fasting, praying and teaching.

The medieval lives of St Kevin portray him as a hermit and a miracle-worker.

There’s a legend that St Kevin was praying in his tiny cell and he had to extend his arm out a window. His hand was so still that a blackbird nested in it, so the saint was forced to keep it there until the eggs hatched and the chicks flew away.

In his poem 'St Kevin and the Blackbird', Saemus Heaney wonders whether the holy man was in agony throughout this ordeal, or rather lost in a zen-like trance, having:

And on the riverbank forgotten the river’s name”.

According to another story, in one of the two lakes there lived an otter that helped the hermit for many years. When he lived alone it sometimes brought him fish, and when Kevin was abbot it delivered salmon to the brethren, particularly in a period of famine. One time, when the man of God was praying in the lake’s cold water, he accidentally dropped his prayer-book in the water. The otter at that very minute emerged holding the prayer-book in its mouth—the book was absolutely undamaged. Once one monk was overcome by greed: he decided to kill the otter and to use its skin to make gloves for himself. But the clever mammal felt his evil intention and quietly left that site forever.

A boar was being chasedby a group of hunters with their dogs. It ran to where Kevin sat praying under a tree, and cowered beside him for protection. When the dogs saw the saint in prayer, they laid on their stomachs, and would not approach the boar. When the hunters decided they would ignore the man and kill the boar, a flock of birds settled in the tree above the praying saint. The hunters took this as a sign, and left man and beast alone.

When Kevin was an infant a mysterious white cow came to his parents house every morning and evening and supplied the milk for the baby.

When Kevin was old enough he was put tending sheep. One day some men came to him and begged him to give them some sheep. He was touched by their poverty and gave them four sheep. When evening came, however, and Kevin’s sheep were counted the correct number were still there.

A less romantic legend about Kevin suggests he once drowned a woman who tried to seduce him.

Another time one autumn day Kevin was in the kitchen. Meals were being prepared for harvesters who were busy gathering crops in the fields when a number of pilgrims called and asked for food. Kevin, filled with compassion, gave them the harvester's dinner. He was rebuked by his superiors for his action. He then told the attendants to fill all the ale jars with water and gather together all the bare meat bones. Then he prayed alone and, it is said, the water turned to ale and the bones were covered with meat again.

All the sons of King Colman had died early, apart from his youngest. In order to protect him, the king entrusted the baby to St. Kevin's care. Unfortunately, the monastery could not provide for the baby, as there were no cows there to give milk for the babe. Kevin, seeing a doe on the monastery grounds, commanded it to nurse the babe prince along with her fawn, which it did. Alas, a she-wolf killed the doe before the child was ready to abandon milk. As a penitence for this murder, the wolf was commanded to provide milk for the baby and the fawn until both were weaned from milk, which the wolf did.

A young man living near the monastery was struck with epilepsy. One day, it was revealed that he would be cured of his malady by eating an apple from the monastery. Unfortunately, the monastery had no apple trees. When Kevin learned of this, he commanded a grove of willows to produce apples, which they did. The young man was cured, and the willows produced apples for over four centuries. 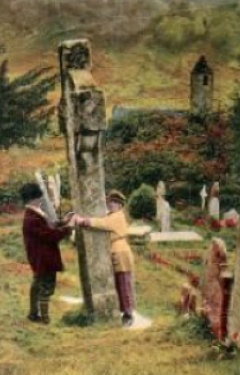 According to legend, anyone who can wrap their arms around St. Kevin's Cross at Glendalough will receive their wish. St. Kevin's Cross is a fine example of a plain cross, and it was carved from a single granite stone. It is over one metre across the arms. It's ring is very unusual, as it is not perforated at the intersection of the shaft and the arms. This old Victorian postcard shows a lady with her arms around the cross.

St. Kevin died on 3rd June 618 of natural causes at the age of 120 years. He was canonized in1903. His feast day is celebrated on 3rd June and is also sometimes known as a Pattern Day in Glendalough.

He is the patron saint of blackbirds.