St. Walpurga was the Anglo Saxon daughter of St. Richard the pilgrim and Sister of St.Willbalf. Saint Walpurga was born in Devon, England, in 710 A.D.

She studied Medicine and became a christian missionary to Germany. She founded a Monastery in Heidenhien which became an education centre of culture.

Saint Walpurga died in 777 and her tomb, to this day, produces holy oil known as St.Walburgis’ Oil which is said to heal sickness; Benedictine nuns distribute this oil in vials to pilgrims who visit Saint Walpurga's tomb.

Saint Walpurga was hailed by the Christians of Germany for battling "pest, rabies and whooping cough", as well as against witchcraft. She is often depicted holding bandages in her hand.

The celebration of Walpurgis Night has little to do with either Christianity, or Saint Walpurga. Instead, the origins of this festival may be found in the period before the arrival of Christianity in northern Europe. As the festival falls during the period when spring arrived, pagan rituals welcome spring and ensure the fertility of the land. In German folklore, for instance, it is said that witches from all over the land would gather for a great Sabbath on top of the Brocken (also known as the Blocksberg), the highest peak of the Harz mountain range of north central Germany.

It is noted for the phenomenon of the Brocken Spectre and for witches' revels which reputedly took place there on Walpurgis night.

The Brocken Spectre is a magnified shadow of an observer, typically surrounded by rainbow-like bands, thrown onto a bank of cloud in high mountain areas when the sun is low. The phenomenon was first reported on the Brocken. 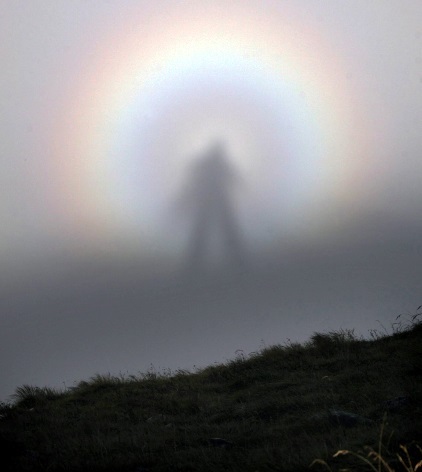 Walpurgis Night was believed to be a night when witches and other evil entities were roaming freely around the land. So on Walpurgis Night, people would dress up in costumes, and make loud noises to ward off these malevolent forces. People would also hang blessed sprigs of foliage from houses or barns, or leave offerings of bread with butter and honey (known as ‘ankenschnitt’) for Phantom hounds.

The lighting of bonfires was also a means of warding off witches. In pre-Christian times people would bring their livestock back out to graze around the spring equinox. In order to scare away wild animals, they would light bonfires, dance around them, and make much noise. In rural parts of southern Germany, it was the custom to play pranks such as tampering with neighbours' gardens, hiding possessions, or spraying graffiti on private property a reminder of Halloween and trick or treat.

When Christianity arrived, the bishops found that these activities were a little too pagan. Instead of banning it, the bishops decided to shift it to Walpurgis Night, so that it could be associated with the Christian saint.

30th April is Páleníčarodějnic - Burning of the witches, or čarodějnice - The witches. Huge bonfires up to 8 metres (26 ft) tall with a witch figure are built and burnt in the evening, preferably on top of hills. An effigy of a witch is held up and thrown into a bonfire to burn. Young people gather around. Black smoke formations are cheered as "a witch flying away".

The feast is sometimes associated with Slavic goddess Marzanna which represents winter and death. As evening advances to midnight and the fire is dying down, it is time to go search for a cherry tree in blossom. This is another feast, connected with the 1st May. Young women should be kissed under a cherry tree. The First of May is celebrated as "the day of those in love". 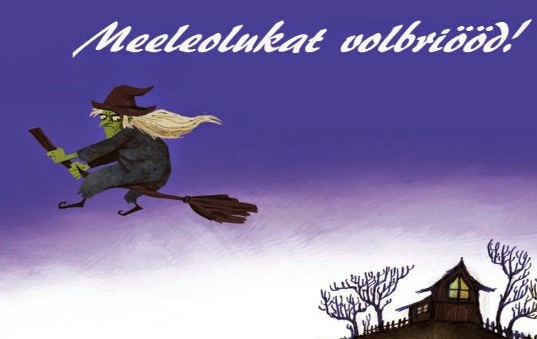 Volbriöö is celebrated throughout the night of 30th April and into the early hours of 1st May, and is a public holiday called "Spring Day" (Kevadpüha). Volbriöö is an important and widespread celebration of the arrival of spring in the country. Influenced by German culture, the night originally stood for the gathering and meeting of witches. Modern people still dress up as witches to wander the streets in a carnival-like mood. In Tartu, the university town in southern Estonia, students in fraternities and sororities, start the night with a traditional procession through the streets, followed by visiting each other's sorority houses throughout the night.

Known as Vappu this is one of the four biggest holidays in Finland along with Christmas Eve, ‘New Years Eve and Juhannus - Midsummer.

Walpurgis witnesses the biggest carnival style festival held in Finland's cities and towns. The celebration begins on the evening of 30th April and continues on 1st May. Although it was initially celebrated by the upper class, during the late 19th century it became popular amongst university students.

One tradition is to drink sima, a home made low-alcohol mead, along with freshly cooked tippaleipä, funnel cakes.

In the capital, Helsinki, the capping takes place (on 30th April at 6 pm) of Havis Amanda, a nude female statue.

For most university students, Vappustarts a week before the day of celebration and seems to be like ragweek in Ireland. Vappu coincides with the May Day parade. Traditionally, 1st May is celebrated by the way of a picnic in a park. For most, the picnic is enjoyed with friends on a blanket with food and sparkling wine. Some people arrange extremely lavish picnics with pavilions, white tablecloths, silver candelabras, classical music and extravagant food. The picnic usually starts early in the morning, where some of the previous night's party-goers continue their celebrations. Some student organisations reserve areas where they traditionally camp every year. Student caps ,mead and streamers and balloons have their role in the picnic and the celebration as a whole.

Valborg, as it is called in Swedish, marks the arrival of spring. The forms of celebration vary in different parts of the country and between different cities. The celebrations are a public event, and normally include lighting the bonfire, choral singing and a speech to honour the arrival of the spring season,often held by a local celebrity. In the Middle Ages, the administrative year ended on 30th April. Accordingly, this was a day of festivity among the merchants and craftsmen of the town, with trick-or-treat, dancing and singing in preparation for the forthcoming celebration of spring.

"The first of May is a great popular festival in the more midland and southern parts of Sweden. On the eve of the festival, huge bonfires, which should be lighted by striking two flints together, blaze on all the hills and knolls."

Valborg bonfires are part of a Swedish tradition dating back to the early 18th century. At Valborg, farm animals were let out to graze and bonfires (majbrasor, kasar) lit to scare away predators. In Southern Sweden an older tradition, no longer practiced, was for the younger people to collect greenery and branches from the woods at twilight.and the branches were used to decorate the houses of the village. The reward for this was to be given eggs. Perhaps a connection to Easter eggs?

Choral singing is a popular pastime in Sweden, and on Walpurgis Eve virtually every choir in the country is busy. Singing traditional songs of spring is widespread throughout the country. The songs are mostly from the 19th century and were spread by students' spring festivities.

The strongest and most traditional spring festivities are also found in the old university cities, such as Uppsala and Lund, where students gather at events that last most of the day from early morning to late night on Siste April - The Last Day of April - as it is called in Lund, or Sista April as it is called in Uppsala. For students, Walpurgis Eve heralds freedom as traditionally the exams were over. On the last day of April, the students don their characteristic whitecaps and sing songs of welcome to spring, to the budding greenery and to a brighter future.

Uppsala students, have a breakfast that includes champagne and strawberries. Since 1975, students honour spring by rafting on Fyris river through the centre of town with rickety, homemade, decorated rafts.

In Gothenburg, the carnival parade, The Cortege, which has been held since 1909 by the students at Chalmers University of Technology, is an important part of the celebration. It is seen by around 250,000 people each year. Another major gathering is in the Garden Society of Gothenburg to listen to student choirs, orchestras, and speeches. An important part of the gathering is the ceremonial donning of the student cap, which stems from the time when students wore their caps daily and switched from black winter cap to white summer cap.

The island of Texel celebrates a festival known as the ' Meierblis ' (roughly translated as 'May-Blaze') on that same day, where bonfires are lit near nightfall, just as on Walpurgis, but with the meaning to drive away the remaining cold of winter and welcome spring. In recent years a renewed interest in pre-Christian religion and culture has led to renewed interest in Heksennacht (Witch's Night) as well.

Walpurgis Night was observed in rural communities in Linconshire until the second half of the 20th century, with a tradition of hanging cowslips to ward off evil.

Walpurgisnacht in literature and music

The last chapter of book five in Thomas Mann’s The Magic Mountain is also called "Walpurgisnacht."

From Bram Stoker's short story, Dracula’s Guest, an Englishman (whose name is never mentioned) is on a visit to Munich before leaving for Transylvania. It is Walpurgis Night, and in spite of the hotelier's warning not to be late coming back, the young man later leaves his carriage and wanders toward the direction of an abandoned "unholy" village. As the carriage departs with the frightened and superstitious driver, a tall and thin stranger scares the horses at the crest of a hill.