Saint Melangell is the patron saint of hares.

Little known outside Wales and Great Britain, the secluded Welsh shrine of St. Melangell, deep in the Berwyn Mountains, is dedicated to a sixth-century Irish woman, an anchorite who lived here for many years, alone and unknown.

"St Melangell was the daughter of an Irish monarch, who had determined to marry her to a nobleman of his court. The princess had vowed celibacy. She fled from her father's dominions and took refuge in this place, where she lived fifteen years without seeing the face of a man.

Brochwel Yscythrog, Prince of Powys, being one day hare hunting, pursued his game till he came to a great thicket, where, he was amazed to find a virgin of surpassing beauty, engaged in deep devotion, with the hare he had been pursuing under her robe, boldly facing the dogs, who retired to a distance howling, notwithstanding all the efforts of the sportsmen to make them seize their prey. Even when the huntsman blew his horn, it stuck to his lips.

Brochwel heard her story, and gave to God and her a parcel of lands, to be a sanctuary to all that fled there. He desired her to found an abbey on the spot. She did so, and died abbess at a good old age. She was buried in the neighbouring church, called Pennant.

Her hard bed is shown in the cleft of a neighbouring rock. Her tomb was in a little chapel, or oratory, adjoining the church, and now used as a vestry room. This room is still called 'Cell-y-bedd' or the Cell of the Grave.

Her relics as well as her image have been long since removed; but I think the last is still to be seen in the churchyard. The legend is perpetuated by some rude wooden carving of the Saint, with numbers of hares scuttling to her for protection. She properly became their Patroness. They were called 'Oen Melangell' (St. Monacella's Lambs)." 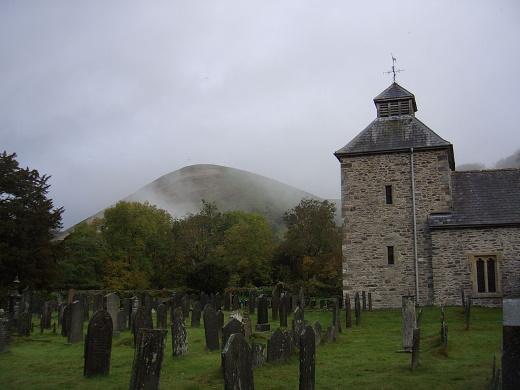 Pennant Melangell, is a place of great natural beauty deep in the Berwyn Mountains. The small river, Tanat, runs by a narrow lane from the nearby village of Llangynog into a quiet green valley surrounded by high hills and the rugged promontory of Moel Ddu Maw (Moel Dimoel). For most of the year, powerful waterfalls cascade down the cliff-side.

The current St Melangell’s is a Norman church, built c. 1100 by order of the king in thanksgiving for peace. It is situated on a former Bronze Age site and is ringed by ancient yew trees estimated to be over two thousand years old. Parts of it date from the twelfth century, and it also incorporates materials of even older builds.

When the church was restored in the 1960’s, Melangell’s relics were discovered under the chapel floor. These are now deposited in her shrine which attracts many visitors, more than 10,000 pilgrims a year, but not enough to disturb its tranquillity. It is the oldest existing Romanesque shrine in northern Europe. Close by, The Saint Melangell Centre offers support to people in need by offering a contemplative space and opportunities for spiritual refreshment and renewal.