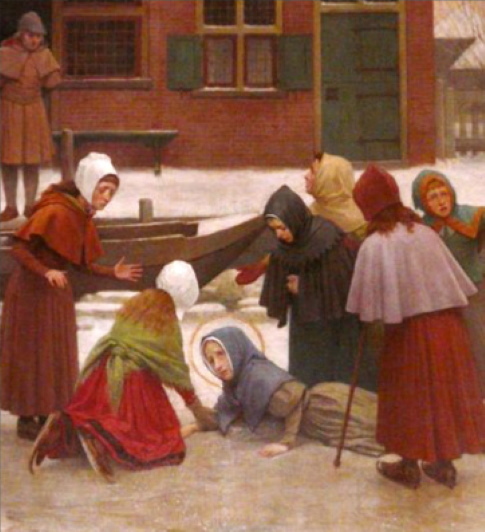 Patron Saint of Ice Skaters Lydwina was born in Schiedam, Holland, one of nine children. Her father was a labourer. In 1395, At age 15, she was ice skating when she fell and broke a rib. She never recovered and became progressively disabled for the rest of her life.

Lydwina experienced visions throughout her life, including one of a rosebush with the inscription,

"When this shall be in bloom, your suffering will be at an end."

After her fall, Lydwina fasted continuously and acquired fame as a healer and holy woman. During these years of intense suffering and humiliation, her faith continued to grow and she was blessed with many mystical experiences.

Lydwina was greatly devoted to the Passion of Christ and is said to have received the stigmata, joining in Christ’s suffering on Fridays. Although she was ridiculed by civil and church leaders, she maintained her devotions. Lydwina was especially devoted to her Guardian Angel and she is often depicted in art in conversation with her heavenly companion.

At Schiedam, her hometown, there is a document that attests to her complete lack of food and sleep. At first she ate a little piece of apple, then a bit of date and watered wine, then river water contaminated with salt from the tides. The authenticating document from Schiedam also says that Lidwina shed skin, bones, parts of her intestines, which her parents kept in a vase and which gave off a sweet odour. These gained so much attention that Lydwina had her mother bury them.

In 1433, she saw the rosebush and died soon after at the age of 53 on Easter Sunday, 14th April, 1434 and was buried in a marble tomb in the chapel of the parish church of Schiedhams which became a place of pilgrimage. In 1615 her relics were taken to Brussels, but in 1871 they were returned to Schiedam. On 14 March 1890, Pope Leo XIII officially canonized Lydwina.

She is known as the patron saint of ice skaters and the chronically ill.

Historical texts reveal that she had a debilitating disease. Some scholars think this had many characteristics similar to multiple sclerosis, such as the age of onset, duration, and course of disease. Lydwina’s disease began soon after her fall. From that time onward, she developed walking difficulties, headaches and violent pains in her teeth. By the age of 19, both her legs were paralyzed and her vision was disturbed. Over the next 34 years, Lidwina's condition slowly deteriorated, although with apparent periods of remission, until her death at the age of 53. Together these factors suggest that a possible posthumous diagnosis of multiple sclerosis therefore dating the disease back to the 14th century.