Many cultures have believed that the stars represent the consciousness of God. Meditate on them, celebrate their presence through story telling, dance and ritual and you can gain knowledge of the divine and enlightenment. They twinkle and shine and fill us with wonder. Going out on a cold, frosty night and looking up to the stars brings a sense of awe and delight, connecting one to another and to the universe.

Star light, star bright, the first star I've seen tonight.
I wish I may, I wish I might have my wish I wish tonight. Amen.

Pinocchio - The theme song of the movie can be taken as inspired by Sirius.

Sirius, also called Alpha Canis Majoris or the Dog Star, brightest star in the night sky. The primary reason for the star’s impressive appearance is because it’s a close neighbour to earth.

January and February are perfect months for both Northern and Southern Hemisphere observers. It's visible in evening skies in late winter; in late summer, you'll find it in the east in the pre-dawn hours.

A world wide association with dogs and wolves might be linked to the astral layout in that Sirius seems to be following a giant in the sky, Orion. One easy way to find Sirius in winter evening skies is to locate Orion.

The bright star is a short distance southeast of Orion; the three stars of Orion’s belt can be used as a “pointer” to Sirius.

Sirius might also be called the New Year’s star. It’ll ring in 2023 by reaching its highest point in the sky around the stroke of midnight. That’s true for every New Year’s Eve.

Because the stars rise and set two hours earlier with each passing month, on 1st February 2023, Sirius will be highest at around 10 p.m. local time.

It is the “real light” shining in the East, the spiritual light, whereas the sun illuminates the physical world, which is considered to be a grand illusion. 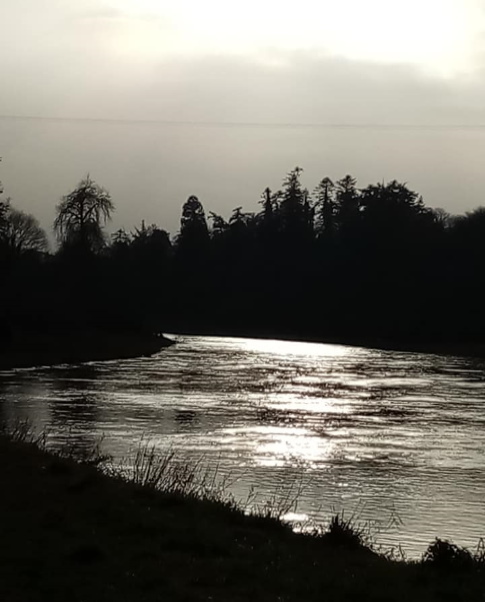 In Irish mythology a dog accompanies a water goddess: Boann (River Boyne) and Dabilla. He died when the river flooded, being turned into the stones of Rockabill, just off the coast near the exit of the Boyne into the Irish Sea.

The Boyne floods in the winter, and there is a suggestion that Newgrange was aligned to the rise of Sirius as well as the sun, at winter solstice.

You will find more on this fascinating research at Anthony Murphy's wonderful website - sirius-the-dog-star-shone-into-newgrange-when-it-was-built.

We cannot consider Sirius without mentioning the Fever Sun and Dog days. So, a short diversion from Imbolc in February to Summer.

Sirius is associated with an Egyptian goddess - Sothis / Sopdet. She was usually shown wearing the crown of Upper Egypt with a star on top, and her title was the “Bringer of the New Year and the Nile Flood”.

This is an important time of year, celebrated by Egyptians as an annual holiday for two weeks starting 15th August, known as Wafaa El-Nil, confirming the cycle of the seasons and fertility of the land.

The annual flooding of the Nile was a sign that the fertile season was beginning. This deposited rich black earth onto the fields surrounding the river, taking place as Sirius was rising just before the sun, after having disappeared from the skies for roughly 70 days. (Before that it was too close to the sun to be seen.) This inundation took place in early July, and was the beginning of the Egyptian year.

The helical (dawn) rising of Sirius (early August in 21st century) in the summer brought hot weather to the Greeks and Romans, and was known as the "Scorcher". The Romans believed that during the “dog days” of July the heat drove dogs rabid. 3rd July to 11th August - Dog Days of Summer

Humans could develop a fever called seirasis, from the Greek name for Sirius, Seirios, “scorching”. The Romans, who saw Sirius as red, sacrificed red dogs to it during the three agricultural festivals: the Robigalia in May to avert rust on the crops, then the Floralia and Vinalia, festivals of flowers and fruits.

A controversial book, The Sirius Mystery, published in 1971 by Robert Temple, proposed that an ancient West African tribe from Mali – the Dogons – knew that Sirius was actually two stars, A and B. As they did not have telescopes, and these stars cannot be separated by the naked eye, he believed that the Dogons had “direct” connections with beings from Sirius. They were also studied by many including anthropologists Marcel Griaule and Germain Dieterle.

In Dogon mythology, humanity is said to be born from the Nommo, a race of amphibians who were inhabitants of a planet circling Sirius. They are said to have “descended from the sky in a vessel accompanied by fire and thunder” and imparted great knowledge to humans. The Dogon’s mythology is very similar to Sumerian, Egyptian, Israelite and Babylonian legends of the myth of a “great teacher from above”.

Perhaps the longest processional celebration in the world, taking several years, is the Sigui. Starting in the northeast, at Youga Dogorou, each village takes turns celebrating and hosting elaborate feasts, ceremonies, and festivities. They celebrate for around a year before the 'sigi' moves to the next village. The last one started in 1967 and ended in 1973; the next one will start in 2027, as they occur every 60 years.

A ritual to honour and recognize these first ancestors. Male initiates learn a secret language and carve their mask which is said to represent hunters, warriors, healers, women, and people from neighbouring ethnic groups. The masks may also depict animals, birds, objects, and abstract concepts.

A mythical Buddhist / Hindu relic - one of four artifacts - that fell from the sky during the reign of king Lha Thothori Nyantsen of Tibet. Referred to throughout history as a wish granting jewel it is believed to have originated in Sirius. There is no proof that it exists today.

The Tibetan symbol for the Cintamani is the pyramid of triple circles. This is reminiscent of the Triple Spiral symbol seen at Newgrange.