In the long dark days in the Northern Hemisphere we need something to mark the turning of the year, often to cheer us up, and pragmatic humans have created winter holidays and celebrations all round the world.

For Christians it is a time to celebrate the birth of Christ, for some humanists it is suitable to remember Newton's birthday on 25th December, others celebrate Germanic Yuletide and others witness the Solstice solar standstill event flocking to ancient monuments as they believe their ancestors did.

On 25 December 1656, an MP in the House of Commons complained of getting little sleep the previous night because of the noise of their neighbours’ “preparations for this foolish day…”.

Many are familiar with Cromwell's apparent ban of 'NO' on all Christmas joy but go to No. 5 on the list for a different take on the use of a ban.

Thus we learn how we carry out this celebration varies. Some see it as a time to fast, others as a time to feast. There is no 'right' or 'wrong' way, just 'your' way and 'my' way.

Christmas pork pie making today in our house - to celebrate and get in the mood here is a fact... which makes me so glad we live in 21st century.

In 1644, Oliver Cromwell banned pie as he decided it was a "pagan form of pleasure".

It wasn't a complete and utter ban on pies, though - just a ban on Christmas celebrations and foods that were associated with the "pagan" holiday, such as mince pies, turkey, and Christmas ale.

We learn from Historic England -

From 1656, legislation was enacted to ensure that every Sunday was stringently observed as a holy day - the Lord's Day. By contrast, shops and markets were told to stay open on 25th December, and in the City of London soldiers were ordered to patrol the streets, seizing any food they discovered being prepared for Christmas celebrations.

I posted this two years ago, but just discovered the coincidence that we are making pork pies again on the same date this year - 2019. NJ.

No. 1 harked back to Cromwell, with this one we are into the 21st century nay-sayers.

In 2017 a Cornish school decided to abandon a nine year tradition of the local children putting their decorations on the community village tree. The parents took matters into their own hands and the tree was dressed eventually.

And in 2019 decorations in a Kentish town were banned by the County Council because of Health and Safety fears, too late in November for the locals to plan an alternative.

So put up those decorations, bring in the Holly and Ivy and have a lovely light Christmas. May your baubles and bling brighten up your days in the darkness of winter.

In Dublin the decorations are rock and roll.. Dublin Lights 2019...

Watching the Christmas cake being 'fed' with the weekly sherry treat, wondered what foods we had lost or had been forbidden - found this - King Cake.

Linked to Mardi Gras this may well be the Christianisation of earlier traditions.

The website French food in the U.S. has more about the Galette....

"THE FRENCH CELEBRATION: HOW IT WORKS

The Galette des Rois is a way for French people to celebrate the Epiphany, the arrival of the Three Wise men (Magi). Every year, on January 6th, people gather pour tirer les rois, to find the kings. The traditional galette is cut in a very specific number of slices: one slice for each person sitting at the table plus one. The extra slice is symbolic for the first poor person passing by.

Initially, the lucky charm was a bean but it has since evolved and was replaced at the end of the 19th century by porcelain trinkets, and today porcelain or plastic trinkets. Today, the diversity of lucky charms is so important that people collect them."

Thanks to Anne for pointing out that in Spain the cake is called the Roscón de Reyes. 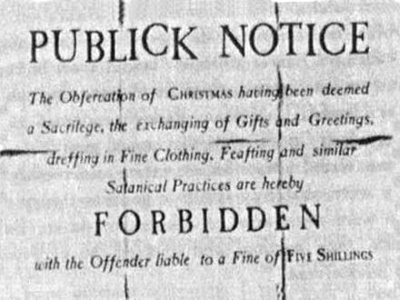 Back to Oliver Cromwell and the 17th century when Christmas Carols were banned. Singing at Christmas was a sin, not just a decadent excess.

Such carols as the Holly and the Ivy, which celebrate the evergreens in the heart of winter disappeared 'underground'.

In the United States some of the devout Puritan settlers in Massachusetts Bay called Christmas 'Foolstide' .... and in Boston this notice appeared....

Bing Crosby’s 1943 hit “I’ll Be Home for Christmas”. Concerned that the song could damage British morale during World War II, the BBC stopped broadcasting this favourite.

One of the oldest Irish carols (believed to come from the 12th century) is the Wexford Carol.

Here's a reversal to the usual bans of 'do not' enjoy these pagan pleasures...

In Viking lands, in the 10th century, it was illegal to fail to make a Christmas Ale.

The Scandanavians brewed their barley based Jul to encourage the sun to return to it's summer strength and Gods and Goddesses of fertility for the coming year's harvest. Later, after Christianity became the 'state' religion, the pagan was assimilated into their Christmas traditions.

We have confirmation of this with the excavation of Viking brew houses - read more here about Viking brewers and their products.

Lars Marius Garshol has a wonderful blog about the history of these Christmas ales ...
Read more of Lars' information here

According to several internet sources:

“Yet another beer brew we are required to make, man and wife from equal amounts of malts, and to bless it Christmas night in thanks to Christ and St. Mary, for a good year and peace.

If this is not done, three marks must be paid to the bishop. But if someone sits three winters without doing so, or cannot pay the fees that we have added for our religion, and this can be proven, then he has forfeited every penny of his worth. The king shall have half, and the bishop the other half. But he may confess his sins and make church penance and stay in Norway. If he will not he shall leave the realm of our king.”